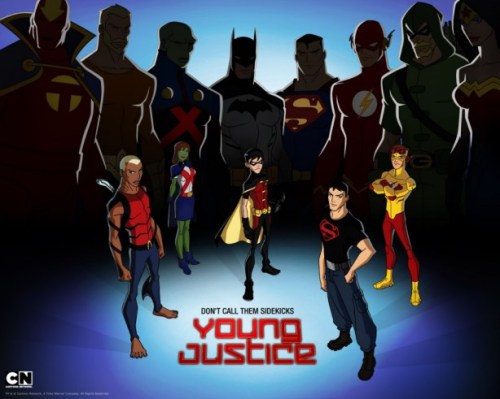 Welcome! On this special episode Troy and Will are joined by Chris and Omni from The Cape Podcast (www.thecapepodcast.com). They talk about the first four episodes of Young Justice on the Cartoon Network. Their love for the characters and storylines come shining through, do give it a listen!

1) Introduction of Troy Price, Will Mitchell, Chris Price, and Omniac

Episode 1: Independence Day – Robin, Aqualad, Kid Flash, and Speedy are finally ready to join the Justice League as full members. However, they soon discover that are to be treated as “junior members”. An enraged Speedy leaves, while the other three strike out on their own to investigate a mysterious fire at Cadmus Laboratories. The trio soon discovers that Cadmus conceals a major conspiracy, and one of its goals is to create a clone of Superman for their own ends.

Episode 2: Fireworks – Kid Flash, Robin, and Aqualad are captured by the Cadmus genomorph forces, which prepare to clone them and dispose of the originals. Their only hope is the Superman clone, “Superboy”, who must choose between freedom and subservience to those who created him.

Episode 3: Welcome to Happy Harbor – Speedy refuses to join the team, leading the members of Young Justice to wonder if their team is nothing more than a big joke to keep the young heroes “in their place”. Meanwhile, Miss Martian feels that she doesn’t belong on the team. The team battles a villain named Mister Twister, who they mistakenly believe is really Red Tornado testing them.

Episode 4: Drop-zone – Batman sends Young Justice on its first official mission, to investigate a neo steroid called Venom. The heroes ultimately find themselves in the middle of a small war between Bane and the Cobra Cult. Meanwhile, the heroes realize they need a team leader – but who will it be?

3) Contact Information: Email us at completelycomics@gmail.com or search Completely Comics on Facebook. Or leave a voicemail at 641.715.3900 and enter extension 694617#

One response to “Completely Young Justice”