This week the Complete Comics gang share all the comic book news that is the news across the nation! (Kudos if you get the Hee Haw reference.)

We extend a warm welcome to our new and returning listeners.

ICv2 estimated value of the digital comics market in 2011 was $25 million, triple the 2010 figure, and predicts that digital will account for 10 percent of the entire comics market in 2012. Digital sales grew faster in the second half of the year, which ICv2 attributes to three factors: DC’s decision to release its New 52 comics digitally the same day as print, the industry-wide trend toward same-day print and digital releases, and the proliferation of different platforms on which to read digital comics.

SMALLVILLE Season 11.  Written by former Smallville show scribe Bryan Q. Miller, the new digital first series will be published digitally on April 13, 2012, with new digital chapters released weekly thereafter. Additionally, the online chapters will be offered in a print periodical, along with an episode guide to the hit television series, with the first print issue released on May 16. The new comic book series picks-up where the show left off.

May marks another first for the “New 52” era of DC Comics — oversized annuals for Batman, Teen Titans and Animal Man.

The Batman annual is co-written by series writer Scott Snyder with James Tynion IV.  the issue will feature the debut of classic villain Mr. Freeze in DC’s New 52 continuity, and fit into the building Court of Owls storyline.

The regular Teen Titans team of writer Scott Lobdel and artist Brett Booth are joined on that book’s annual by co-writer Tom DeFalco. The issue kicks off a crossover that continues in Superboy #9, Legion Lost #9 (written by DeFalco), Teen Titans #9 and The Ravagers #1. In a post on The Source, Lobdell reveals that the comic will feature the first glimpse of “the Colony,” and introduce much of The Ravagers cast.

The Animal Man annual is written by series writer Jeff Lemire and illustrated by Timothy Green II.  “In many ways this Annual is like a prequel to the crossover storyline that Scott Snyder and I have planned for Animal Man and Swamp Thing,” Lemire said in a post on The Source.

Comic Sales for January.  DC leads the pack with most units sold, with a clean sweep of the top ten best selling comics, according to Diamond.  Marvel, however is the leader in Dollar Market for the second month in a row.

Doctor Who Season 7 is set to begin filming Februrary 20th.  The new season of Who will be a momentous one: as we know, Karen Gillan (Amy) and Arthur Darvill (Rory) are set to make their final voyage in the TARDIS this season, and the Doctor is set to meet a “new friend.” And with the 50th anniversary looming in 2013, there are sure to be many surprises to come. 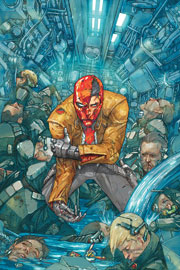 RED HOOD AND THE OUTLAWS #6
How did Jason Todd and Princess Koriand’r of Tamaran meet – and what has bonded them together in a way that neither could have imagined? At long last the story can be told! It’s a scorcher! 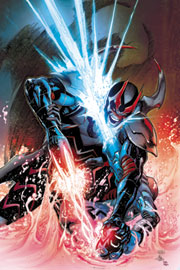 Jaime Reyes has been captured by La Dama and her powerful magicks, and she wants the scarab, no matter the cost. Will he be able to fight off the nightmares she throws at him, or will he succumb to her power?

7) Contact Information: Email us at completelycomics@gmail.com or goto Completely Comics on Facebook.  http://www.facebook.com/completelycomics. Or leave a voicemail at 641.715.3900 and enter extension 694617#