‘This is our best show ever!’ -Troy

Comic Book Jerk joins Troy and Will to catch everyone up on Young Justice: Invasion. This episode has so much more news and Fun, you will listen to it more than once!

Thank you Comic Book Jerk for joining us to catch everyone up on Young Justice!

S2, Ep1
Apr. 28, 2012
Happy New Year!
Five years after the Justice League were controlled by Vandal Savage, their time under his control comes back to haunt them. The Team has to take on alien invaders, starting with Lobo.

S2, Ep2
May 5, 2012
Earthlings
The team of Miss Martian, Superboy, Beast Boy and Adam Strange are sent to the planet Rann.

S2, Ep3
May 12, 2012
Alienated
The invading Kroloteans receive aid from an unexpected ally.

S2, Ep4
May 19, 2012
Salvage
Superboy and Blue Beetle take on Intergang, while Nightwing tries to salvage the soul of a former comrade.

S2, Ep5
May 26, 2012
Beneath
Blue Beetle searches for a missing friend, while the team of Miss Martian, Batgirl, Bumblebee and Wonder Girl return to Bialya.

S2, Ep6
Jun. 2, 2012
Bloodlines
A mysterious intruder appears inside Mount Justice claiming to be a time-traveling visitor from the future.

5) Resource of the Week: 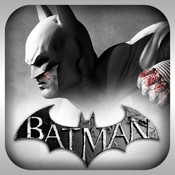 UPDATED WITH NEW LEVELS & FEATURES – OPTIMIZED FOR THE NEW iPAD!
The inmates have escaped and Batman has his hands full defeating an army of henchmen and some of his most iconic villains. Scour the rooftops and the seedy underbelly of Gotham City through a series of one-on-one battles with the Joker, Two-Face and more, as well as the Batman: Arkham City Lockdown exclusive – Deathstroke. Choose from several Batman skins and power-ups as you punch, kick and combo your way to cleaning up Gotham City.

And the critics love it!
• “…blown away at the graphics and fun multi-touch gameplay” – GeekWire
• “Batman Arkham City Lockdown is a beautiful, accessible game that iOS gamers and Batman aficionados will enjoy” – MacLife
• “Overall, Lockdown is a solid expansion of the Arkham universe.” – USA Today Game Hunters

Troy and Will were given the opportunity to review a new comic  published by Pinwheel Press. Will loves the comic and strongly recommends it, while Troy does have some suggestions on what might make it the perfect product.

Here is a link to Man of God’s Facebook Page.

• THE TEEN TITANS LOST in an inner-world!

• What did SOLSTICE learn from the LEGION LOST team during THE CULLING? Hint: It has to do with the mystery surrounding KID FLASH’S origin!

• DINOSAURS – and a new threat!

* a proud member of the Comic Related Podcast Network.